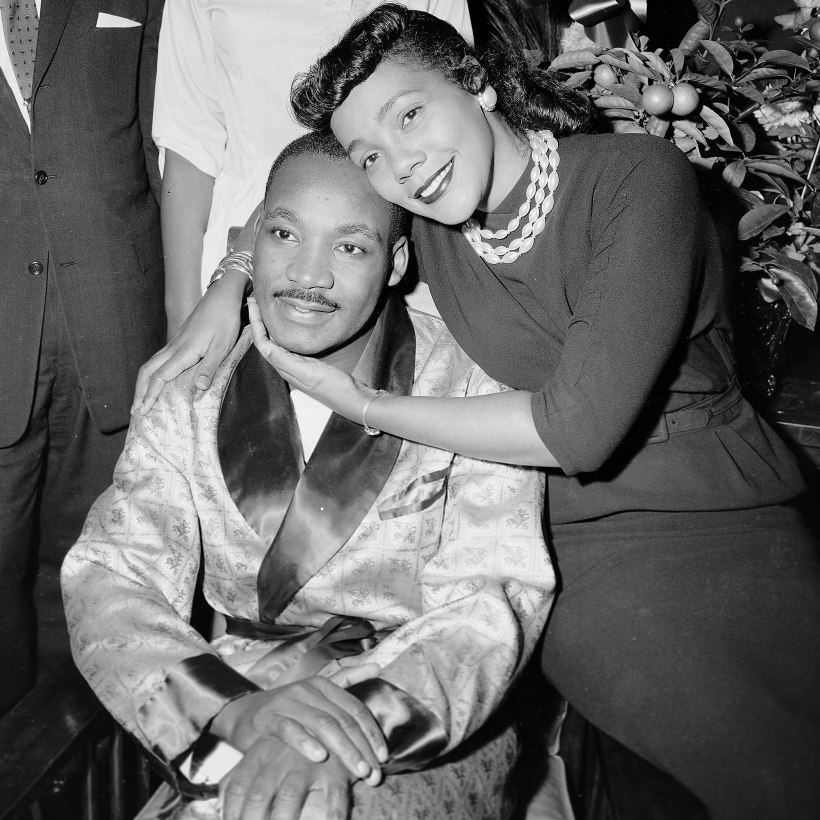 Every year, I try to find the right way to recognize Martin Luther King Day. This year, I thought I’d let his wife, his partner, his widow, Coretta Scott King, explain the meaning of the holiday.

The Meaning of The King Holiday

The Martin Luther King, Jr. Holiday celebrates the life and legacy of a man who brought hope and healing to America. We commemorate as well the timeless values he taught us through his example — the values of courage, truth, justice, compassion, dignity, humility and service that so radiantly defined Dr. King’s character and empowered his leadership. On this holiday, we commemorate the universal, unconditional love, forgiveness and nonviolence that empowered his revolutionary spirit.

We commemorate Dr. King’s inspiring words, because his voice and his vision filled a great void in our nation, and answered our collective longing to become a country that truly lived by its noblest principles. Yet, Dr. King knew that it wasn’t enough just to talk the talk, that he had to walk the walk for his words to be credible. And so we commemorate on this holiday the man of action, who put his life on the line for freedom and justice every day, the man who braved threats and jail and beatings and who ultimately paid the highest price to make democracy a reality for all Americans.

The King Holiday honors the life and contributions of America’s greatest champion of racial justice and equality, the leader who not only dreamed of a color-blind society, but who also lead a movement that achieved historic reforms to help make it a reality.

On this day we commemorate Dr. King’s great dream of a vibrant, multiracial nation united in justice, peace and reconciliation; a nation that has a place at the table for children of every race and room at the inn for every needy child. We are called on this holiday, not merely to honor, but to celebrate the values of equality, tolerance and interracial sister and brotherhood he so compellingly expressed in his great dream for America.

It is a day of interracial and intercultural cooperation and sharing. No other day of the year brings so many peoples from different cultural backgrounds together in such a vibrant spirit of brother and sisterhood. Whether you are African-American, Hispanic or Native American, whether you are Caucasian or Asian-American, you are part of the great dream Martin Luther King, Jr. had for America. This is not a black holiday; it is a peoples’ holiday. And it is the young people of all races and religions who hold the keys to the fulfillment of his dream.

We commemorate on this holiday the ecumenical leader and visionary who embraced the unity of all faiths in love and truth. And though we take patriotic pride that Dr. King was an American, on this holiday we must also commemorate the global leader who inspired nonviolent liberation movements around the world. Indeed, on this day, programs commemorating my husband’s birthday are being observed in more than 100 nations.

The King Holiday celebrates Dr. King’s global vision of the world house, a world whose people and nations had triumphed over poverty, racism, war and violence. The holiday celebrates his vision of ecumenical solidarity, his insistence that all faiths had something meaningful to contribute to building the beloved community.

The Holiday commemorates America’s pre-eminent advocate of nonviolence — the man who taught by his example that nonviolent action is the most powerful, revolutionary force for social change available to oppressed people in their struggles for liberation.

This holiday honors the courage of a man who endured harassment, threats and beatings, and even bombings. We commemorate the man who went to jail 29 times to achieve freedom for others, and who knew he would pay the ultimate price for his leadership, but kept on marching and protesting and organizing anyway.

Every King Holiday has been a national “teach-in” on the values of nonviolence, including unconditional love, tolerance, forgiveness and reconciliation, which are so desperately-needed to unify America. It is a day of intensive education and training in Martin’s philosophy and methods of nonviolent social change and conflict-reconciliation. The Holiday provides a unique opportunity to teach young people to fight evil, not people, to get in the habit of asking themselves, “what is the most loving way I can resolve this conflict?”

On the King Holiday, young people learn about the power of unconditional love even for one’s adversaries as a way to fight injustice and defuse violent disputes. It is a time to show them the power of forgiveness in the healing process at the interpersonal as well as international levels.

Martin Luther King, Jr. Day is not only for celebration and remembrance, education and tribute, but above all a day of service. All across America on the Holiday, his followers perform service in hospitals and shelters and prisons and wherever people need some help. It is a day of volunteering to feed the hungry, rehabilitate housing, tutoring those who can’t read, mentoring at-risk youngsters, consoling the broken-hearted and a thousand other projects for building the beloved community of his dream.

Dr. King once said that we all have to decide whether we “will walk in the light of creative altruism or the darkness of destructive selfishness. Life’s most persistent and nagging question, he said, is `what are you doing for others?’” he would quote Mark 9:35, the scripture in which Jesus of Nazareth tells James and John “…whosoever will be great among you shall be your servant; and whosoever among you will be the first shall be the servant of all.” And when Martin talked about the end of his mortal life in one of his last sermons, on February 4, 1968 in the pulpit of Ebenezer Baptist Church, even then he lifted up the value of service as the hallmark of a full life. “I’d like somebody to mention on that day Martin Luther King, Jr. tried to give his life serving others,” he said. “I want you to say on that day, that I did try in my life…to love and serve humanity.

We call you to commemorate this Holiday by making your personal commitment to serve humanity with the vibrant spirit of unconditional love that was his greatest strength, and which empowered all of the great victories of his leadership. And with our hearts open to this spirit of unconditional love, we can indeed achieve the Beloved Community of Martin Luther King, Jr.’s dream.

May we who follow Martin now pledge to serve humanity, promote his teachings and carry forward his legacy into the 21st Century.

For more information including how to make a donation, see The King Center’s website.

6 thoughts on “The Meaning”