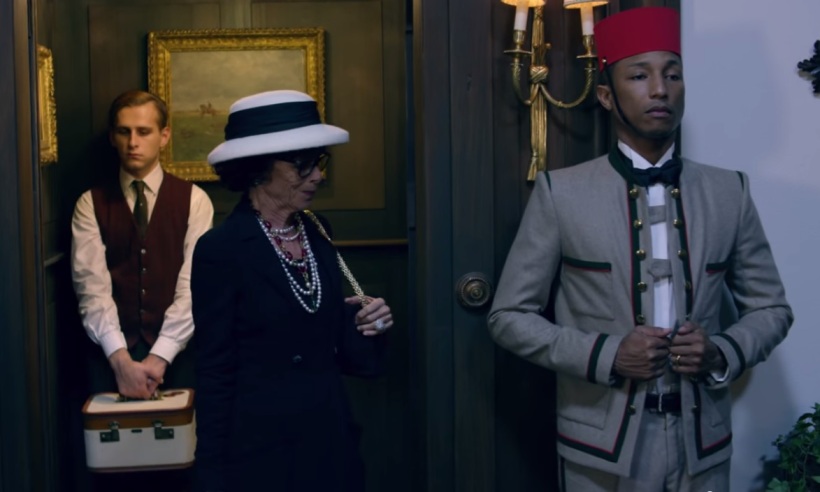 “In order to be irreplaceable, one must always be different.” -Coco Chanel

A few weeks ago, at a palace in Salzburg, the House of Chanel held its Métiers d’Art collection, the annual runway show to end all runway shows. It’s presented every year outside the typical fashion show schedule, and the purpose is to showcase and bring attention to all of the House of Chanel’s artisan partners who make their lace, their hats, their jewelry, their famous buttons, their hand embroidery, and all the other small elements that make Chanel’s merchandise the art it is. It’s quite the spectacle. This year, the video below, “Reincarnation,” kicked off the programme.

The film by Karl Lagerfeld starring Pharrell Williams, Cara Delevingne, and the fantastic Géraldine Chaplin is a fantasy which begins with the late-night animation of some famous paintings of the last of the Habsburgs, Emperor Franz Joseph and Empress Elizabeth of Austria, a notoriously unhappy couple who have been portrayed here as anything but. (I really recommend you check out the Jezebel article about the couple. It’s a great read!) The royals swan around and sing some stuff. Pretty enough, but not much reason to stick around. But don’t give up yet.

The best part of the video is the end, which offers a brief dramatization of one of the more prevalent stories about how Coco got her inspiration for the first iconic Chanel jacket. (The other popular version has her getting inspired when she borrowed clothes from her boyfriend, the Duke of Westminster, but I like the bellboy story much better.)

There are some awkward unexplained moments, (why did the waitress shove the waiter then run away?), and the little bit of halfway hip hop dancing toward the end is hilariously out of place. The best thing you can say about Pharrell’s music is that it’s basically inoffensive, though I desperately wanted to turn off the little kid’s track. I think the soundtrack would have been better without any vocals at all.

While it makes no sense whatsoever, the video still manages to be exceptionally lovely to look at and weirdly, inexplicably intriguing. I loved the Chanel gang symbols, and I found the Géraldine Chaplin payoff at the end worth sticking around for.

Of course, the video’s design is predictably lush and highly stylized and very Lagerfeld-for-Chanel. Overall, I liked it, but I’d love to hear what you think.

There’s also a making of video! (Karl Lagerfeld is such an adorable kook, I think I’d be willing to watch video of him watching paint dry.)

12 thoughts on “Poetic License and the House of Chanel”