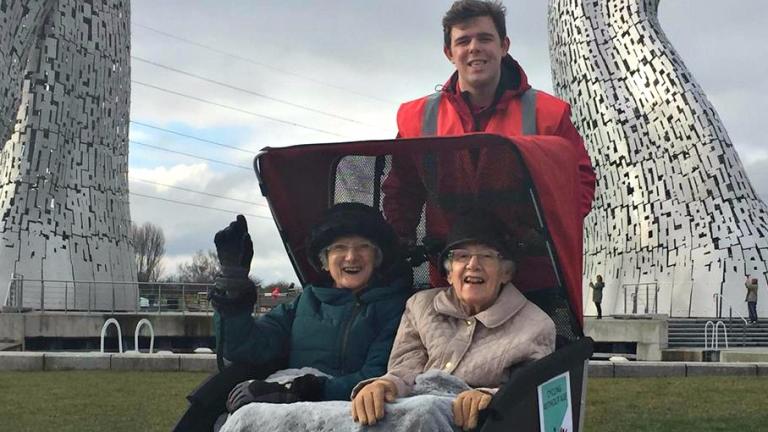 This is a sweet story about a sweet young man who is making an effort to end loneliness among the elderly. Fraser, a 20-year-old student who is studying medicine at Falkirk University in Scotland, volunteers at his local nursing home four to five times a week and takes pairs of residents for pedicab rides along the countryside.

“Everyone has some time in their lives that they could give back to the older generation, and offer them opportunities like this they wouldn’t get otherwise.”

Fraser is part of a group of about 30 student volunteers who have taken out around 150 residents since February. The idea originated a couple of years ago in Denmark with five trishaws (rickshaws with two passenger seats) pedaled by volunteers. It quickly spread, first throughout Denmark and then to another 28 countries. Young Fraser heard about the idea and he and his friends launched it in Scotland in early 2017.

The Scottish volunteers are hoping they, too, can turn their project into a country-wide program, and they’re off to a great start. Since the BBC  featured the program in their “Amazing Humans” series, the video has gotten 20 plus million views. Once the video went viral, Cycling Without Age started a crowdfuding campaign to expand their volunteer program across Scotland.

11 thoughts on “The Best Biker Gang”