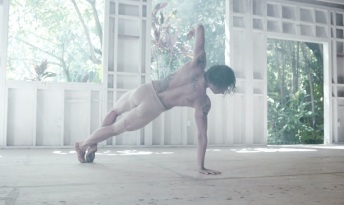 (Note: I got all kinds of scooped on this video, and I nearly scrapped the post when I realized I’d taken too long, but I decided that at least some of you might have missed it.)

Ballet dancer Sergei Polunin absolutely kills it in this video set to Hozier’s “Take Me to Church.” Directed by David LaChapelle, the video is pure and beautiful and perfect. I knew Polunin was talented, but I had no idea he could fly!

He’s a very well-known and well-respected young dancer who became the Royal Ballet’s youngest ever principal dancer in 2010. However, talented as he is, he’s unfortunately likely best remembered for his stunning walk-out from the company in January of 2012 at the age of 22. He was openly distressed about the pressure his position as a principal dancer was putting on him, and he told people he didn’t want to dance anymore. Rumors spread that he was experimenting with heroin and thinking about becoming a tattoo artist.  It was hard to imagine that someone so talented and so successful could just walk away from dance, but shortly after he left Royal Ballet, he landed a principal role at The Stanislavsky Music Theatre in Moscow. Thank goodness!

In case you weren’t already familiar Sergei Polunin, here’s a beautiful, short video about the dancer from 2013.

Choreographer Jade Hale-Christofi is a brilliant dancer himself. Formerly a principal with Ballet Black, Hale-Christofi only recently hung up his dance belt to try his hand at choreography. If this piece is any indication, I certainly hope he keeps at it!